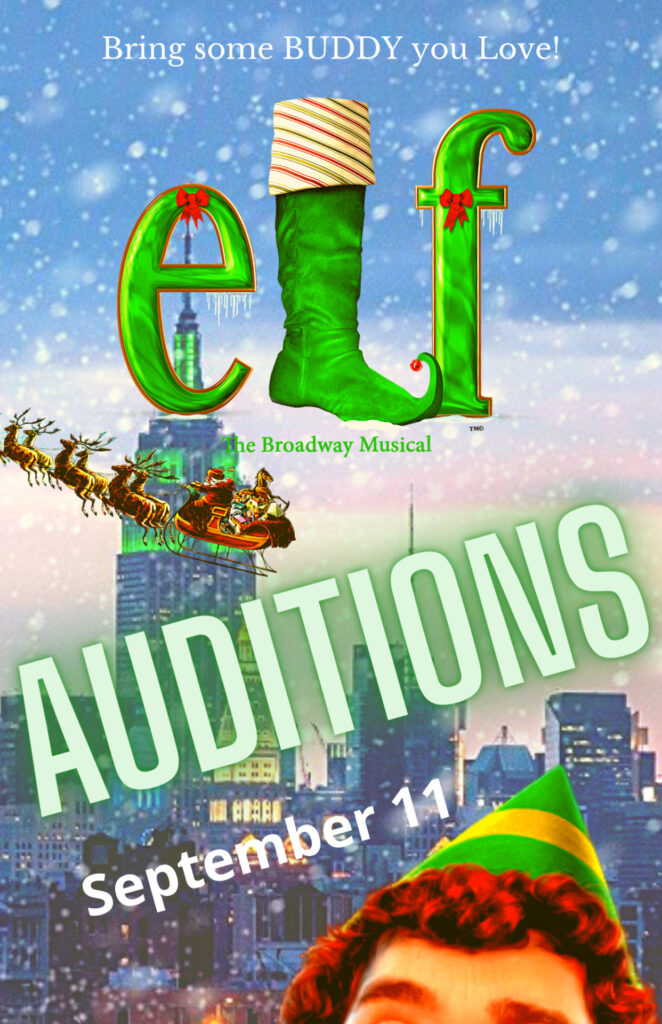 The Augusta Players announces auditions for the holiday musical the 2nd production of their 77th Season: ELF – The Musical. Songs by Matthew Sklar and Chad Beguelin; Book by Thomas Meehan and Bob Martin. Directed by Scott Seidl, Choreography by Ashley Chasteen, Music Direction by Jeannie Butler.

Great roles for performers of ALL types. All roles are open. We are actively seeking a diverse cast. Performers of all races and ethnicities, gender identities, sexualities and abilities are especially encouraged to audition and will be considered for all roles

DATES / TIMES:
Saturday, September 11
10:00am – 4:00pm. Open Call. (Actors/Singers/Dancers)
Performers will be seen in the order that they arrive.

If there is absolutely no way you can attend one of those dates / times please contact s.seidl@augustaplayers.org as soon as possible.

Actors/Singers/Dancers – Please see the character breakdown and audition information below. Prepare a musical theatre song in the style of the show. You will be asked to also do the movement audition as well. A movement combination will be taught. You may be asked to come to callbacks to read from the script. No a capella singing. An accompanist will be provided.

PLEASE do not call the school with questions and please read this whole notice before calling The Augusta Players.

Please bring personal calendars and be prepared to list all conflicts (Mondays-Sundays) beginning with October 11, 2021 through Sunday, December 12, 2021. (Rehearsals may start later) Please do not assume that we know when any general holidays are (i.e., Thanksgiving break) and plan to list those as conflicts if you will be out of town or otherwise engaged.  Conflicts must be noted at the audition. Only conflicts noted at the audition will be taken into consideration. NO CONFLICTS ALLOWED FROM November 29 – December 12, 2021.

For more information about the show go to: https://en.wikipedia.org/wiki/Elf_(musical)

This hilarious fish-out-of-water comedy follows Buddy the Elf in his quest to find his true identity. Buddy, a young orphan, mistakenly crawls into Santa’s bag of gifts and is transported to the North Pole. The would-be elf is raised, unaware that he is actually a human until his enormous size and poor toy-making abilities cause him to face the truth. With Santa’s permission, Buddy embarks on a journey to New York City to find his birth father and discover his true identity. Faced with the harsh realities that his father is on the naughty list and his half-brother doesn’t even believe in Santa, Buddy is determined to win over his new family and help New York remember the true meaning of Christmas. The best way to spread Christmas Cheer is singing loud for all to hear.

If you have other questions after reading this notice, you may contact The Augusta Players at (706) 826-4707 or email info@augustaplayers.org