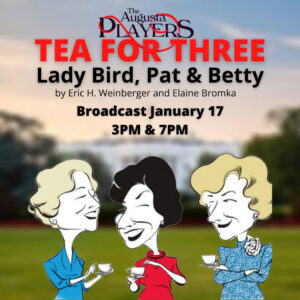 TEA FOR THREE: Lady Bird, Pat & Betty reveals life and love in the White House. Particularly pertinent in an era of heightened politics, TEA FOR THREE humanizes the political scene with stories both whimsical and deeply moving.

It is a behind-the-scenes look at Lady Bird Johnson, Pat Nixon, and Betty Ford. Share the journey of each as she deals with the fishbowl of First Ladydom. A first hand view of the Presidency through the eyes of the woman closest to the President.

Filmed safely in high definition with a three camera shoot captured LIVE. You need to see this! Each character is presented in a solo performance that when combined create a powerful, pertinent, sad and funny piece of theater.

Produced by
The Augusta Players Inc.

On Sunday, January 17, you have 2 performances to choose from: 3PM and 7PM. The show runs 90 minutes with 2 brief intermissions. Broadcast to your streaming device or smart TV. A link to the performance will be emailed to you no later than 2 hours before your chosen performance time.